“Before the regulation, everyone did their job on their own. Now there is a great synergy that will allow us to move forward” 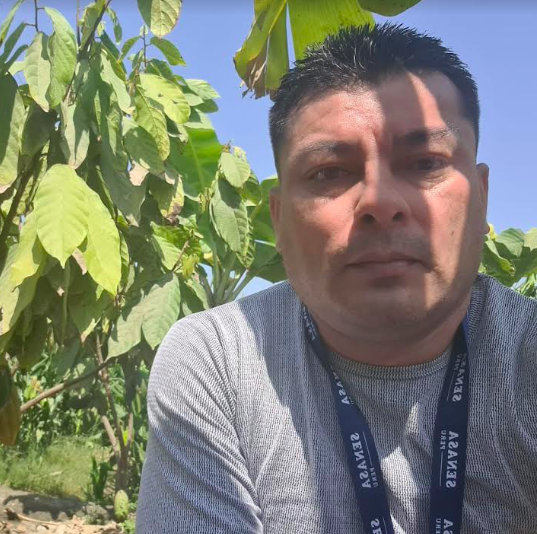 We spoke with Javier Aguilar, a specialist from Peru’s National Agrarian Health Service. He is an expert who works to find answers to cadmium and help cocoa producers and growers.

In our conversation, he gave us an overview of the impact and effects of the regulation of maximum cadmium levels in the European Union (EU 488/2014).

What is the current outlook?

In Peru there are 16 cocoa-producing regions. Of these, we have determined that the biggest problem of cadmium contamination is in the northern zone. There are more than 100,000 families that are involved in this entire production process, mainly small producers from family farming.

There are about 180 thousand hectares with a production of 160 thousand tons produced by the 16 departments of Peru and generate more than 300 million in exports, according to figures presented by the Ministry of Agrarian Development and Irrigation, in 2021.

The Peruvian cocoa sector has been increasing its areas every time. There are quite a few cooperation actions that facilitate the formulation of plans for the development of this crop, even in jungle and mountain areas where the process of conversion of illicit crops to cocoa is carried out.

Since the approval of the regulation, what has been the experience in Peru?

Before the European Union regulation came into effect, the entire country was thought to have cadmium problems. All the producers suffered this blow, but already with the study that we developed between INIA, SENASA and the Bioversity Alliance (Study on the prevention and mitigation of the accumulation of cadmium in cocoa through a better use of genetic diversity, inoculation of mycorrhizae and management soil) we were able to determine that the main areas with the highest cadmium content were the northern area, mainly Tumbes and Piura.

However, it is important to highlight that in this northern part of the country one of the best quality cocoas in the country is produced: white cocoa.

It is worth mentioning that the Cooperativa Agraria Norandino (Organization of small producers), at the national level, is the only company that processes cocoa because in most areas they send it to Europe as beans.

On the other hand, with the entry into force of the European regulation, the opening of new markets has been achieved, including the Asian market with great acceptance of our cocoa.

How to lend a hand to those who have the challenge of cadmium?

Before the entry into force of the regulation, each authority and ministry did their job on their own; It is there, where we unite as a country and with the participation of different entities we managed to have a guide to where to continue and have a synergy that will allow us to move forward. We participate in different international spaces such as the WTO, Codex Alimentarius, among others.

We have socialized in different regions, in technical tables to provide support with research and we continue to perfect a research document to determine what is the best step to follow for the northern zone. We look forward to providing more solutions to growers.

Has it been constant learning?

Completely. From what has happened with cocoa and the lessons it has learned to add them to other bets such as the cultivation of avocado, asparagus, among other crops. We want to anticipate effective actions over time.

In Peru we have developed a manual of good agricultural practices for cocoa with an emphasis on cadmium. I hope that it will come out soon and allow recommendations to be made so that they can improve their production system.

What recommendations and message would you like to give to cocoa farmers in Peru?

The cocoa sector in our country is of great importance, even more so since it is internationally recognized as an exporter of fine aroma cocoa, which is why through our institution we will continue to contribute to the work that is being carried out in order to obtain best practices to help small producers reduce cadmium contamination in cocoa.